"I know it sounds sub-optimal. But the good news is it'll kill us no matter where we went!"
"Well, that's reassuring."
― Buck and Diego (Ice Age: Collision Course)

"I'm sorry, but does it smell like flaming rocks raining from the sky to anybody else?"
"(Explosion Sound and Mushroom Cloud)"
"Y'know. We probably shouldn't have left all the architects, engineers, and scholars in their homes when we called this meeting. Boy, hindsight, huh?"
― Dwarf King (8-bit Theater)

The power to summon or create meteors and have them crash down at the targets. Sub-power of Space Rock Manipulation. Variation of Gravity Projectile. Technique of Cosmic Manipulation. 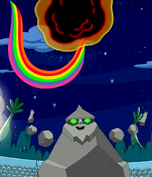 Major Disaster (DC Comics) says goodbye to his costume after becoming a member of the JLA.

Crypto (Destroy All Humans! 2) can use the Meteor Strike Gun to summon a meteor to destroy targets. After upgrading, the gun can summon three meteors and a small planetoid at once.

Invoker (Dota 2) can pull meteors from space to destroy his enemies.

Sinestro (Injustice: Gods Among Us) crushing his opponent with meteors during his Super Move, Sinestro's Might.

Majora's Mask (The Legend of Zelda: Majora's Mask) turning the Moon into a giant meteor with the intent to destroy Termina.

Sakazuki/Akainu (One Piece) using his Meteor Volcano technique, raining down a storm of magma meteor fists.

Issho/Fujitora (One Piece) summoning a meteor from outer space with his Zushi Zushi no Mi powers.

Garchomp (Pokémon Adventures) using Draco Meteor to summon a storm of meteors from the sky. 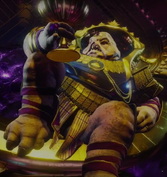 Emperor Calus (Destiny) can summon a meteor storm in his thrown room. 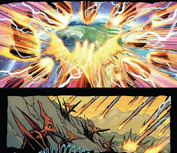 King Ghidorah (Godzilla) guiding a meteor shower to Earth to wipe out the dinosaurs.

Sirin/Herrscher of the Void (Honkai Impact 3rd) throwing hundreds of meteors onto Earth.

Using Gamma Crush, Hulk (Marvel vs. Capcom series) jumps into space before crashing down on his opponent with a meteor.

Wizards who utilizes magic in the Lore of Heaven can summon meteors from the sky to crush their enemies (Warhammer Fantasy).

Chang'e (Over the moon) summons a meteor shower on the moon in one of her rages.

Tyrannosaurus rex/Terry (Dinosaur King) summoning shower of flaming meteors shoot from a nearby volcano and rain down on its opponent.
Add a photo to this gallery

SCP-515 The Sleeper (SCP Animation)
Add a photo to this gallery
Retrieved from "https://powerlisting.fandom.com/wiki/Meteor_Summoning?oldid=1696573"
Community content is available under CC-BY-SA unless otherwise noted.