The power to emit a variety of toxic gases.

User can exude toxic gases, causing various effects on others who inhale these fumes including hyperstimulation, lethargy, coma. Because gas diffuses indefinitely in concentration, it becomes less potent and less concentrated once it has expanded.

Baraggan Louisenbairn (Bleach) releasing his Respira miasma, aging anything it touches to dust. 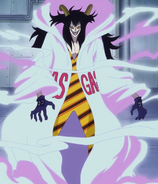 Naraku (InuYasha) can release a cloud of poisonous miasma from his body at will that kills everything it touches. 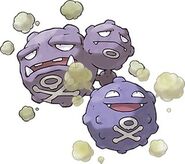 The Meteor Parasite (Crystal Chronicles) released a deadly miasma that covered the whole planet, anyone breathing it or caught inside it, was either killed or corrupted

Four Beast (Toriko) releasing the deadly miasma Green Rain over the human world.
Add a photo to this gallery
Retrieved from "https://powerlisting.fandom.com/wiki/Miasma_Emission?oldid=1449297"
Community content is available under CC-BY-SA unless otherwise noted.