Users of the Bio-Belt; such as the Atom (DC Comics) can expedite their traversal time by shrinking and riding on particle minutia.

The power to travel through shrinking. Technique of Size Manipulation. Lesser version of Shrink Warping

User can transport themselves by scaling down to the micro-level and riding faster than light particle forms, i.e., photons, quarks, neutrinos, cellular matter, etc.

While at the size of an dust mote one can tame any free forming bacteria to act as a mount to traverse upon, or at smaller scales such as the subatomic to particle levels they can simply ride any free forming molecular drift in order to get from place to place.

The Atom (DC Comics) Putting a theory to the test. 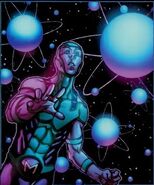 Maul (Wildstorm Comics) having shrunk so much soo fast ended up in a subatomic universe.
Add a photo to this gallery
Retrieved from "https://powerlisting.fandom.com/wiki/Micro_Transportation?oldid=1579190"
Community content is available under CC-BY-SA unless otherwise noted.