The user's bloodstream is primed with bio-machines, used to reorder and adjust ones physical/mental capabilities beyond their usual norm. Basically the user is as much microbial technology as they are themselves, having the ability to modify and/or alternate physiology. 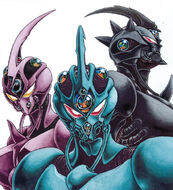 The Guyvers (Bio-Booster Armor Guyver) are self-aware re-programmable bio-organisms which can change and adapt on the fly. 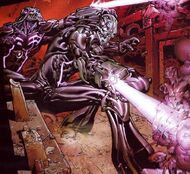 Reggie Mayer's (DC Comics) ability to multiply, was augmented to greater levels by an Armor created from the technology of the original android, naming himself Kid Amazo.

Marc Slayton (The Wild Storm) was implanted with techno-active genetic material that rewired his physiology, giving him any manner of superpowers.

Biomega Island (IDW Publishing) is a gigantic self aware orgamech mass capable of controlling it's own habitual faculties.

Azazel (Project Arms) an extraterrestrial alloy entity from across the stars...

...merged with the child Alice, producing the ARMs cores.
Add a photo to this gallery
Retrieved from "https://powerlisting.fandom.com/wiki/Microrg-Active_Blood?oldid=1606977"
Community content is available under CC-BY-SA unless otherwise noted.