Fuse one's consciousness with that of another.

"Ruler from above / hunt your sworn nemeses down / and leave them no quarter! Mind Melder!"
― Nova Tsukuyomi, Azure Striker Gunvolt

The ability to fuse one's consciousness with another person. Sub-power of Telepathy.

The user can temporarily fuse their consciousness with that of another, resulting in a sharing and transference of knowledge, emotions, and memories. Especially skilled users may use this connection to heal mental damage/illness, or even implant new mental factors in the other's mind.

As the vessel for the Enjoining Spell, Buffy Summers (Buffy Summers) combines the minds, essences, and abilities of herself, Willow, Xander, and Giles in her body.

Abigael's (Charmed 2018) ability to meld her mind with another stems from her demon side. 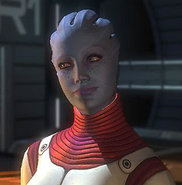 The Asari (Mass Effect) uses this ability for, among other things, reproduction.

Spock mind melding Kirk
Add a photo to this gallery
Retrieved from "https://powerlisting.fandom.com/wiki/Mind_Melding?oldid=1611366"
Community content is available under CC-BY-SA unless otherwise noted.