The user can sense the thoughts of other people, usually hearing them like ordinary speech, but possibly by other senses such as sight. Usually, they sense the surface thoughts (including other mental communications), but they can also learn to push farther into subconscious and memories.

By touching his head, Son Goku (Dragon Ball) reads Krillin's mind, allowing him to catch up on everything that happened before his arrival on Namek. 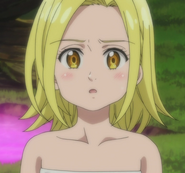 Mind Reader Couch (Xiaolin Showdown) allow the user to hear the thoughts of others.

Because he was born with powerful psychic powers, Dufort (Zatch Bell!) is able to read other people’s minds.

Ultimate Aggregor (Ben 10: Ultimate Alien)
Add a photo to this gallery
Retrieved from "https://powerlisting.fandom.com/wiki/Mind_Reading?oldid=1312774"
Community content is available under CC-BY-SA unless otherwise noted.