Krokorok (Pokémon) has this ability.

User can create, shape and manipulate any/all minerals, a naturally occurring, homogeneous inorganic solid substances with a definite chemical composition and characteristic crystalline structure, color, and hardness. This includes rocks, which are composed of grains of one or more minerals or mineraloids held together by chemical bonds.

Toph Beifong (Avatar: The Last Airbender) can bend and control stone and other forms of earth to her will.

Aang (Avatar: The Last Airbender) in a armor made of crystals

Pohatu (Bionicle Universe) is a Toa that can control the element of Stone.

Rose/Midler's Stand, High Priestess (JoJo's Bizarre Adventure Part III Stardust Crusaders) possesses the ability to shapeshift and assimilate itself into any type of inorganic matter, be it metal, glass or plastic.

Brainiac (Smallville) has power over minerals, allowing him to turn an ordinary rock into silver Kryptonite.

As a master Synergist, Hajime Nagumo (Arifureta Sekai Saikyou) can use alchemy to control, transform and manipulate any kind of ores/minerals in any way or shape he desired, even purified minerals of impurities and fused different minerals together to create alloys...

...transmuting them into powerful weapons. 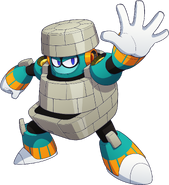 Megalosaurus (Dinosaur King)
Add a photo to this gallery
Retrieved from "https://powerlisting.fandom.com/wiki/Mineral_Manipulation?oldid=1691807"
Community content is available under CC-BY-SA unless otherwise noted.