Bowser (Super Mario Bros/Mario & Luigi) can summon his minions for special attacks, such as Goombas, Koopas, Shy Guys, and more.

The user can summon their own minions, beings that are completely loyal and subservient to the user, whether by magic, technological means, etc. The user can summon any number of minions at once to quickly overwhelm opponents and may even be able to summon a large variety of different minions of different strengths and qualities.

Eon (Ben 10) can summon his servants, which are alternate versions of Ben 10 at any time.

Like Gwen, Charmcaster (Ben 10) can summon Stone Creatures to be her minions.

Neo Cortex (Crash Bandicoot) summons a Lab Assistant to aid him, only for Crash to use it against him.

Using the Dark Mark brands on their forearms, Lord Voldemort (Harry Potter) can summon his Death Eater minions to him when he desires.

The Oni (Jackie Chan Adventures) can summon their respective tribes of Shadowkhan whenever they please...

...as can anyone who wears their respective Oni Masks.

Ganon (The Legend of Zelda) can summon his minions at any time from the Evil Jar.

Captain Olimar (Pikmin) summons his Pikmin with a whistle. 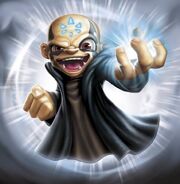 As a Portal Master, Kaos (Skylanders) can summon a wide variety of minions to do his bidding.

Upon its premature awakening, Dark Gaia (Sonic the Hedgehog) broke into countless energy fragments that scattered across the globe... 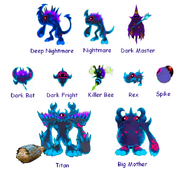 ...forming into Dark Gaia's Minions to carry on their master's desire for destruction.

Dr. Robotnik (Sonic the Hedgehog) can summon his Badnik minions at any time with the press of a button.

The Darkness and the Angelus (Witchblade/Top Cow) can summon the Darklings and Angelus Warriors, their respective minions, at any time for aid.

Kai (Kung Fu Panda) is able to summon his Jade Warriors to attack others and summon them back to him to regain his full power.
Community content is available under CC-BY-SA unless otherwise noted.
Advertisement