The power to manipulate miracles. Divine version of Probability Manipulation. Expression of Nigh Omnipotence.

The user has the ability to induce and manipulate an extraordinary event manifesting divine intervention in human affairs. Miracles are considered to be a divinely natural phenomenon with an extremely outstanding or unusual event, thing, or accomplishment which the user has under their command.

Rika Furude (Higurashi no Naku Koro ni) gained the power to manipulate miracles each time she is killed in a different timeline.

The Witch of Miracles (Umineko no Naku Koro ni) with a scythe that harvests miracles from reality. 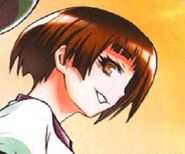 Sanae Kochiya (Touhou Project) Deified Human of the Wind.
Add a photo to this gallery
Retrieved from "https://powerlisting.fandom.com/wiki/Miracle_Manipulation?oldid=1314331"
Community content is available under CC-BY-SA unless otherwise noted.