Looking Glass Knight (Dark Souls II) can use his mirror shield to deflect magic projectiles and summon phantoms to help him fight the Bearer of the Curse.

The ability to use mirrors in a combination of physical combat. Technique of Mirror Manipulation. Variation of Object Combat and Combat Merging.

The user is able to incorporate mirrors of any kind into physical combat, including as projectiles, defensively as shields or to reflect attacks. 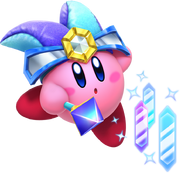 Kirby (Kirby series) can inhale mirror-based foes and gain the Mirror Copy Ability, allowing him to conjure mirrors both for offense and defense.

Dark Meta Knight (Kirby Star Allies) can do what Mirror Kirby does and more, including hiding inside mirrors to evade attacks, deflect projectiles, and using body doubles or giants blades to attack.