Haku (Naruto) can create and manipulate mirrors of ice.

The user can create, shape and manipulate mirrors, objects that reflect light in a way that preserves much of its original quality subsequent to its contact with the mirror. Most mirrors are designed for visible light; however, mirrors designed for other types of waves or other wavelengths of electromagnetic radiation are also used, especially in non-optical instruments.

Some mirrors also filter out some wavelengths, while preserving other wavelengths in the reflection, unlike other light-reflecting objects that do not preserve much of the original wave signal other than color and diffuse reflected light. The most familiar type of mirror is the plane mirror, which has a flat surface. Curved mirrors are also used, to produce magnified or diminished images or focus light or simply distort the reflected image.

Though mirrors are often made from glass, they can also be made of other reflective substances such as crystal, salt, ice, or polished metals. 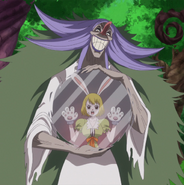 Ishikore-Dome (Valkyrie Crusade) the goddess of mirrors.
Add a photo to this gallery
Retrieved from "https://powerlisting.fandom.com/wiki/Mirror_Manipulation?oldid=1770507"
Community content is available under CC-BY-SA unless otherwise noted.