Owen Reece/Molecule Man (Marvel Comics) once used his power to transform his entire hometown into a nightmarish palace of evil.

The power to manipulate matter on a molecular level. Sub-power of Physics Manipulation and Atomic Manipulation.

The user can create shape and manipulate molecules, a group of atoms and the smallest unit of a physical substance or compound to achieve a wide variety of effects. See List of Molecular Abilities for details.

...turning gas into ice to trap Parker in...

...and heating up a gun due to being in contact with black amber.

Piper Halliwell (Charmed) wields incredible skill in this ability, able to use it to paralyze... 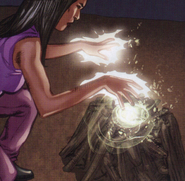 ...and learning he has control over molecules. 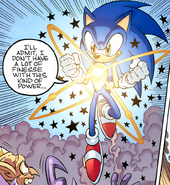 In his Ultra form, Sonic (Archie's Sonic the Hedgehog) has power over local molecules and atoms...

...as he demonstrates by converting air to water with a thought. 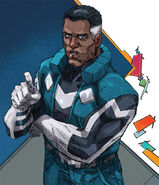 Like Chase, Skylar Storm (Mighty Med) can use this ability in conjunction with her Molecularkinesis to make thing explode, render organisms immobile, and even turn her white highlights of her hair pink to hide her evilness at a greater scale than Chase.

Chase Davenport (Lab Rats) can use his Molecularkinesis in a similar way as it superpower cousin but with more limits. He can lift object, complete stop them, and even immobilize people, thus canceling out users with super speed.

Lexi Krane (Lab Rats) has an ability that is similar to Chase's molecularkinesis but instead she changes the said object on psychical contact, like she turned a metal chair into ice and then melted it.

Patty/Patty Putty (Superhero Kindergarten) can rearrange her own molecular structure to that of stretchy and bouncy putty
한국어 Português do Brasil
Community content is available under CC-BY-SA unless otherwise noted.
Advertisement