The ability to vibrate molecules at a high frequency. Sub-power of Molecular Manipulation.

The user can vibrate the molecules of living (including themselves) and non-living matter at high speeds with various effects, most commonly to passing through or harden other molecules.

Using the Rippling Sword technique, Ophelia (Claymore) vibrates her arm so fast it appears motionless, making her attacks near-impossible to anticipate or block.

The abilities of Lucy's (Elfen Lied) vectors vary depending on their molecular vibration frequency, ranging from phasing through matter...

...to being used as slashing weapons...

...to reconnecting cells to heal wounds.

Medaka Kurokami (Medaka Box) vibrating her foot to bypass an opponent's human shield and hit her directly.
Add a photo to this gallery

Ian Peek (Batman Beyond) uses a specialized vibra-space belt to vibrate his molecules in such a way that he becomes intangible.

Clark Kent/Kal-El/Superman (DC Comics) can vibrate his molecules at such speeds that he becomes invisible and reappears again...

...to match the vibration frequency of a phantom planet...

...to perform an Infinite Mass Punch with the force of a white dwarf star...

...to tear the Cyborg Superman apart...

...and to become intangible, phasing through a punch from Doomsday. 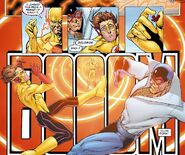 Eobard Thawne/Reverse Flash (DC Comics) is able to create sonic booms just from simply snapping his fingers by vibrating them at high speeds.

As a conduit of the Speed Force like his grandfather, Bart Allen/Impulse (DC Comics) can vibrate his molecules using his supernatural speed to escape containment, such as cages or handcuffs.

...vibrate his hands at super-speeds to loosen rope bindings...

...use the Sonic Heal to vibrate his molecules and heal his wounds...

...vibrate his molecules to become intangible, phasing through a giant Caterkiller...

...and vibrate at such speeds that he becomes invisible, allowing him to attack Robotnik unseen.

Rai (Valiant Entertainment Comics) using his new Japanese enhanced physiological abilities to become an unstoppable battering ram, plowing through an army of wastelanders with ease.
Add a photo to this gallery

Eobard Thawne/Reverse Flash (The Flash) vibrates his arm to pierce through Cisco's chest, killing him instantly.
Add a photo to this gallery

Retrieved from "https://powerlisting.fandom.com/wiki/Molecular_Oscillation?oldid=1513813"
Community content is available under CC-BY-SA unless otherwise noted.