T'ra Saa (Star Wars) using Battle Meditation, an Force ability that boosts the morale, stamina, and overall battle prowess of an individual's allies while reducing the opposition's combat-effectiveness by eroding their will to fight.

The user can manipulate the morale, bolster the willpower, grand strength, stamina and battle prowess of their allies, inspire them to fight. On the other hand, they can also use it to reduce the opposition's combat-effectiveness by making the opposing armies lose the will to fight, causing them to doubt their chances of victory and give up. This power can be used to influence and decide the outcome of any conflict and competition as its user wants. 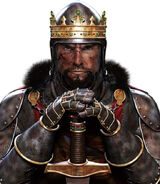 Richard the Lionheart (Medieval II Total War: Kingdoms)
Add a photo to this gallery
Retrieved from "https://powerlisting.fandom.com/wiki/Morale_Manipulation?oldid=1505280"
Community content is available under CC-BY-SA unless otherwise noted.