Charlotte Cook (Mutant X) achieved this ability via a toxic chemical she secreted.

Augment the morality or wickedness in others

The power to augment the morality or wickedness in others, or to make them "Good" or "Evil". Not to be confused with Moral Manipulation.

The user can make people ethically good or immorally evil by psychically kindling the targets’ minds so that they succumb to the voice of truth or to the urge of sin. The victim may feel the calling of the Almighty or some other cosmic force of good or succumb to all inner sins. The effect may expire, but that may be years after the evocations.

The powerful Hyper-Reversal Magic Nirvana (Fairy Tail) which can take light and darkness in all things and switch them. 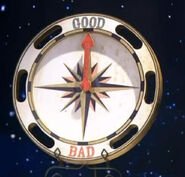 The Moral Compass (Wizards of Waverly Place) is the source of the Angel species magical powers, both good and evil, and can influence good and evil in all worlds in the whole universe.
Add a photo to this gallery
Retrieved from "https://powerlisting.fandom.com/wiki/Morality_Manipulation?oldid=1041673"
Community content is available under CC-BY-SA unless otherwise noted.