Smell the moral center of others.

"This fellow reeks of brimstone and blood worse than anyone I've ever laid eyes on! He is pure evil, right down to his very bones!"
― Robert E.O. Speedwagon to Jonathan Joestar on his adoptive brother, Dio Brando (JoJo's Bizarre Adventure)

The power to discern behavior by scent. Technique of Supernatural Smell. Lesser version of Morality Viewing.

Users are able to read the moral alignment of other people and/or creatures via sense of smell, using their body chemistry to make an intuitive understanding of whether they are good or bad or something in-between.

Robert E.O. Speedwagon (JoJo's Bizarre Adventure) can detect others' personalities and morality by smell, allowing him to recognize Jonathan Joestar's noble spirit and the fact that Dio Brando, regardless of his excuses and abusive past, is pure evil and was born as such.

Wolverine (Marvel Comics) often uses his sense of smell to detect others' character, allowing him to detect enemies and lies. 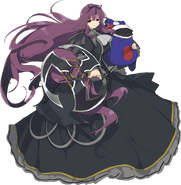 Murasaki (Senran Kagura) can discern a person's character by smell, allowing her to not only learn of Yomi's poor life growing up, but discover Ryōbi and Ryōna's intent to kill Miyabi.
Community content is available under CC-BY-SA unless otherwise noted.