Muggles (Harry Potter) are humans who are born to two non-magical parents and are incapable of performing magic.

Be a mortal being.

"Seven years… Working with the Slayer. Seeing my friends get more and more powerful… All of them. And I'm the guy who fixes the windows. They'll never know how tough it is, Dawnie. To be the one who isn't chosen, to live so near to the spotlight and never step in it. But I know. I see more than anybody realizes because nobody's watching me."
― Xander Harris (Buffy the Vampire Slayer)

"Not every superhero has powers. You can be super without them."
― Syndrome (The Incredibles)

"Yet I’m still here. No super serum. No blonde hair or blue eyes. The only power I have is that I believe we can do better."
― Sam Wilson/Falcon/Captain America (Marvel Cinematic Universe)

"I know what it’s like to be in the orbit of someone who can juggle semi trucks and you want to help out, save the world, and all you can do is just stand there holding the wrench and I know the fear of being vulnerable and I will teach you the ways to handle that. Right now I just want you to know that we’re on the same team we are the extraordinary humans in a family of super people and we have to stick together."
― Lois Lane to Jonathan Kent (Superman and Lois)

The power to possess the status of a mortal being.

The user is a mortal; a mundane being who are naturally vulnerable to injuries and death and generally possessing no special or supernatural powers whatsoever. Variants include victims of Powerlessness Inducement or humans born as such, as well as conditions brought about by loss of immortality, loss of invulnerability, falling from grace, etc.

That being said, mortal beings may have Recessive Genetics that allow their children or descendants to develop powers even if they themselves do not, and at least have knowledge of these abilities, and mortals are generally far from helpless.

Mortals can be empowered in unique circumstances; however, as mortals, they can still be subject to death, natural or unnatural alike, risking themselves in using powers that can be too much to bear or even fatal to them.

Mercury Black (RWBY) was robbed of his Semblance by his father, forcing him to cope without it. 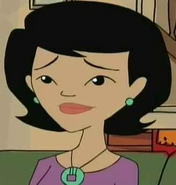 Despite being born to a dragon family, Susan Long (American Dragon: Jake Long) has no dragon powers of her own because they have skipped her generation.

Sokka (Avatar: The Last Airbender), the only non-bender of the original Team Avatar.

Adam and Eve (Biblical Mythology) once they ate from the forbidden fruit they became mortals and will died one day. 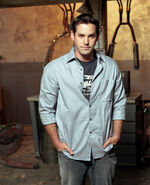 Xander Harris (Buffy the Vampire Slayer) is the only one amongst the Scooby Gang with no supernatural powers.

Tyrael (Diablo 3) was once a very powerful angelic being…

… who choose to fall willing turning himself mortal to unbind himself of laws that bound him to inaction to bring justice to the world.

The Z-Fighters (Dragon Ball series), for all their power, are still mortal, lacking a godly status or ki.

Kratos (God of War) was born a mortal demigod before becoming a true god.

Though born to a family of magic users, Meiling Li (Cardcaptor Sakura) has no magical powers herself.

Unlike her cousin Sakura Kinomoto, Tomoyo Daidouji (Cardcaptor Sakura) has no magical abilities.

Despite his mortality, Sam Wilson/Falcon/Captain America (Marvel Cinematic Universe) mind about the shield changed. So much, that he willingly took it and became the new Captain America to protect his country.

Syndrome (The Incredibles) has no superpowers, but compensates with a genius-level intellect and a steady supply of gadgets he invented.

Izuku (My Hero Academia) never manifested a Quirk in his youth, leading to him being bullied.

Despite their mutations, the Ninja Turtles (Teenage Mutant Ninja Turtles) have no real superpowers, being equal to peak human athletes.

Though mere mortals, the Winchester family (Supernatural) have achieved incredible deeds, from defeating angels, demons, monsters and even gods.

Despite everything that he has been through, Stiles Stilinski (Teen Wolf) still shows no obvious signs of wanting to become a Werewolf, preferring to maintain his humanity and use his non-supernatural gifts to help the pack protect their hometown.

Kaz and Oliver (Mighty Med) were originally nomos who were experts in studying all of their favorite superheroes and villains, knowing all of their strength and weaknesses way before they received powers.
Community content is available under CC-BY-SA unless otherwise noted.
Advertisement