The slime that covers the Brachydios (Monster Hunter) is its mucus, which turns explosive when exposed to its spit.

The ability to generate large amounts of mucus. Sub-power of Mucus Manipulation. Variation of Organic Generation.

User can create large amounts of mucus from their body, which they can use for offense or defense. 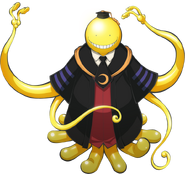 Korosensei (Assassination Classroom) can generate mucus for varied purposes, such as waterproofing, cleansing, adhesive and the replacement of tears.

Nakarkos (Monster Hunter) can shoot a high powered beam of sticky mucus out of its false heads.

Trebol (One Piece) can generate mucus from his nose via his Beta Beta no Mi.
Add a photo to this gallery
Retrieved from "https://powerlisting.fandom.com/wiki/Mucus_Generation?oldid=1422320"
Community content is available under CC-BY-SA unless otherwise noted.