The user can generate multiple attacks in a single instant or repeatedly/numerous times and the enemy has no way of defending against the attacks, from any direction.

Grimmjow (Bleach) launching a barrage of punches at Ichigo. (Click to Animate) 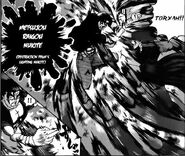