Pain/Nagato (Naruto) can control up to six bodies in addition to his own.

The power to have or create alternate bodies and inhabit them. Not to be confused with Multiple Lives or Replication.

The user can create or possesses alternate bodies that they can inhabit. They may be able to control more than one body at a time while others may only switch bodies after one has died. This is different from Replication, as the bodies can take any form (however, they may be clones of the original as well).

Sheev Palpatine/Darth Sidious (Star Wars) has numerous clone bodies stored on Exegol to transfer his consciousness into upon death.

Seth (Street Fighter) is just one of many genetically engineered replacement bodies for M. Bison.

Uncle Grandpa (Uncle Grandpa) is shown to be able to exist in a near large number of duplicates of himself at once with no clear limit given. 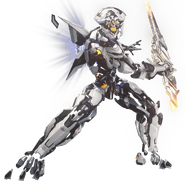 The Warden Eternal (Halo) possesses millions of bodies if his current one is destroyed.

Cary Loudermilk (Legion) shares a body with Kerry Loudermilk, who is able to leave him and act independently of him.
Add a photo to this gallery
Retrieved from "https://powerlisting.fandom.com/wiki/Multiple_Bodies?oldid=1609480"
Community content is available under CC-BY-SA unless otherwise noted.