The Doctor (Doctor Who) famously has two hearts

Have more than one heart.

The ability to have more than one heart. Variation of Auxiliary Organs.

User has multiple hearts which do not have to physically be in the body, they can also be spiritually/mentally present, in other location etc. They may be able to power up their abilities, improving combat, mental or physical capabilities, etc.

When he was young, Sora (Kingdom Hearts) became the vessel to what remained of Ventus' heart.

"Tyrants" such as the T-103 model (Resident Evil) have one or two extra hearts implanted to help support their augmented bodies. 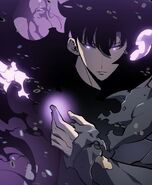