"I am a Hindu, sir, not a cat. I have infinite lives during some of which I may be a cat. In those I do have nine."
― Apu Nahasapeemapetilon (The Simpsons)

The ability to live more than one life-time. Variation of Self-Resurrection.

The user is able to be come back to life after being killed or fatally wounded, giving them multiple chances to live and can review and avoid the mistakes that led to their death.

The Master/Mistress' (Doctor Who) 7 incarnations.

As the oldest living being in Fantasia, The Childlike Empress (The Neverending Story) has a lifespan that is not measured by time, but by names. Each new name grants her a new life. 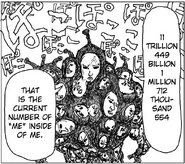 Solomon Grundy (DC Comics) Born on a Monday, Christened on Tuesday, Married on Wednesday, Took ill on Thursday, Grew worse on Friday, Died on Saturday, Buried on Sunday, That was the end, Of Solomon Grundy. 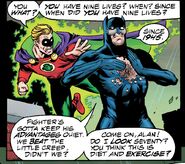 Like his namesake, Wildcat (DC Comics) has 9 extra lives after being cursed.

Avatars (Avatar: The Last Airbender & Avatar: The Legend of Korra)
Add a photo to this gallery
Retrieved from "https://powerlisting.fandom.com/wiki/Multiple_Lives?oldid=1672645"
Community content is available under CC-BY-SA unless otherwise noted.