The all powerful Beyonders (Marvel Comics)

"This world and Dr. Eggman's world exist in separate dimensions. Each of us can think of the other as what is known as a 'parallel universe.' What makes this possible is this so-called Power of the Stars."
― Eggman Nega (Sonic the Hedgehog series)

The Cosmic Tuning Fork (DC Comics) were utilized by the monitors to merge realities in protection against the Anti-Monitor.

The Creation Wheel (Wildstorm Comics) source of the god code known as the Creation Equation.

The Anti-Monitor (DC Comics) Is capable enough to shatter continuum and reshape them to his benefit.

Mammoth Mogul (Archie Comics' Sonic the Hedgehog) at his most powerful, can manipulate enough chaos energy... 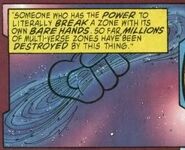 Titan Tails (Archie's Sonic the Hedgehog) wields even greater chaos energy than Mammoth Mogul, allowing him to drain Mogul's power before using it to restore the portions of the multiverse Mogul had previously destroyed.

Empty Hand (DC Comics) at the heart of creation in DC Continuum.

The Star Brand (Marvel Comics) is a zero-point energy generator theoretically powered by the Multiverse itself. With capabilities limited only by the users own understanding and imagination... 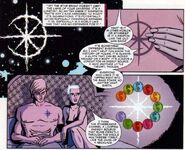 ...leading to an extra-dimensional observers theory about the Star Brand's Power.

After fully merging with his Mother Box, Victor Stone/Cyborg (DC Comics) became a conduit for the entire multiverse, allowing him to draw on its vast energies to make himself more powerful.

The Jeweled Scepter (Sonic Rush Adventure) wields the Power of the Stars, an energy force that ensures the existence of the different parallel dimensions of the multiverse.
Add a photo to this gallery
Retrieved from "https://powerlisting.fandom.com/wiki/Multiversal_Force_Manipulation?oldid=1505359"
Community content is available under CC-BY-SA unless otherwise noted.