Control the multiverse and everything in it.

The ability to manipulate everything within the multiverse. Advanced form of Universal Manipulation.

The user can manipulate the entire multiverse and everything within. 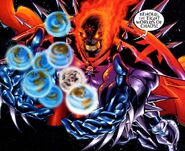 Lord Chaos (Chaos! Comics) After living through the Pandora Effect and Uncreation Wave Mitchel Wardlow became a cosmic entity who split the earth into eight alternate derivatives which he could control.

With it's multiple manifestations of itself, The Presence (DC Comics)

...has undisputed power over all multiversal conceptual attributes, ranging from words...

...and even of Appearances.

The Infinite Forest (Destiny), A massive Reality Engine that produces and influences infinite number of realities across all times and spaces...

... was once ruled over by Panoptes, Infinite Mind, who influenced all the realities inside on how they will be reflected in the outside universe. 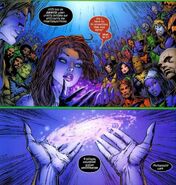 The White Phoenix of the Crown (Marvel Comics) can manipulate the entire multiverse via the power of Existence Mastery.

The One Above All (Marvel Comics) is easily both the center and architect of all marvel continuum.

Supreme God Z (Super Robot Wars) can compress and contain the entire multiverse into a tiny sphere to use as an attack.
Add a photo to this gallery
Retrieved from "https://powerlisting.fandom.com/wiki/Multiversal_Manipulation?oldid=1404543"
Community content is available under CC-BY-SA unless otherwise noted.