At his peak, the Anti Monitor (DC Comics) could destroy the Pre-Crisis DC Multiverse.

"All of existence go away!"
― Zeno (Dragon Ball Super)

"I am Hexagon. Destroyer of Universes!"
― Hexagon (Teen Titans Go! VS Teen Titans)

The power to destroy a multiverse and everything in it. Variation of Destruction. Advanced form of Universe Destruction. Opposite to Multiverse Creation.

The user can destroy an entire multiverse and everything in it.

Death Mwauthzyx (Angry Video Game Nerd: The Movie) can destroy the entire multiverse with a turn of the satellite dish on its head.

In the form of Master Mogul, Mammoth Mogul (Archie's Sonic the Hedgehog) eventually gained enough power to destroy most of the Sonic multiverse.

The Chrono Navigator (Ben 10) can destroy the entire multiverse, consisting of the universes that branch off "ad infinitum".

…leaving behind an empty void.

Lina Inverse (Slayers) can cast the spell Giga Slave, which destroys anything in its way as well as bring the Lord of Nightmares into the world. However if casted improperly, The spell can destroy the entire world.

The Void (Super Paper Mario) is an interdimensional black hole that will eventually grow large enough to engulf and destroy the entire multiverse.

Celestialsapiens (Ben 10) can destroy a multiverse with 6 thoughts

Solaris (Sonic the Hedgehog) is a super-dimensional life-form capable of devouring time and space across different dimensions until there was nothing left of reality itself.

Jack noir (Homestuck) can cast the red miles, which spread through a infinite sized multiverse and destroys it.

Owlman (Justice League: Crisis on Two Earths) designed the Quantum Eigenstate Device aka QED to destroy an entire earth, but when he learned of the multiverse he decided to denotata it on Earth-Prime to destroy the Multiverse. 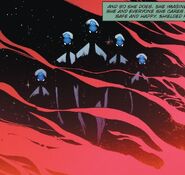 When a Multiverse went bad, The Hands (DC Comics) comes and erase it from existence.
Add a photo to this gallery
Retrieved from "https://powerlisting.fandom.com/wiki/Multiverse_Destruction?oldid=1677789"
Community content is available under CC-BY-SA unless otherwise noted.