Transform others into mummies.

The power to transform others into mummies. Variation of Undead Conversion

The user is able to mummify others.

Ahmanet (Dark Universe) was able to suck the life out of others, rejuvenating herself and mummifying them in an instant, turning them into her undead slaves.

Cooper (Grabbed by the Ghoulies) has been mummified by an Ancient Mummy.

Pharaoh (Miraculous: Tales of Ladybug & Cat Noir) can turn people into mummies under his control... 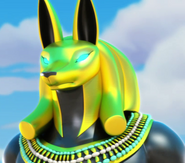 ...by channeling the power of Anubis, creating his own mummy army.
Add a photo to this gallery
Retrieved from "https://powerlisting.fandom.com/wiki/Mummification?oldid=1561865"
Community content is available under CC-BY-SA unless otherwise noted.