Mumm-Ra, The Ever-Living (Thundercats) is an unkillable and virtually godlike mummy whose power is only exceeded by the "Ancient Spirits of Evil."

User with this ability either is or can transform into a Mummy Lord, one of the most powerful types of undead. Mummy Lords have unfathomable powers rivaling that of gods, for in their time in the afterlife they acquired even greater dynamic prowess and prestige than when they were alive. Many of whom were praised as pharaohs and queens or their influential advisory's/consorts in a past life.

The lord of all mummies may hold total dominion over all other Mummies as well as the dominions in which they once ruled over while among the living. More often than not the rise of a Mummy Lord will bring with it all of the world ending plague and disaster upon the current world.

High Priest Imhotep (The Mummy) had died while buried alive only to ascend becoming a one man Armageddon with otherworldly powers.

Ahmanet (Dark Universe) was an ancient sorceress who made a powerful pact with Set the Egyptian God of Death before being mummified alive. After a millienia of slumber, Ahmanet was revived as an undead being with tremendous power over necromancy.

Settra the Imperishable (Warhammer), the High King of Nehekhara, is also one of the most powerful Liche Priests in existence, ruling the desert land of Nehekhara with his mummified subjects by way of his Mortuary Cult.

Pharaoh (Miraculous Ladybug) hold command over all of the mummies he creates.

Pharaoh (Monster Girl Encyclopedia) are a breed of undead that holds authority over all mummies and the desert region they inhabit.

Anubis (Monster Girl Encyclopedia) are a species of werewolf that holds authority over legions of mummies.

Apocalypse (Marvel Comics) is an all powerful mutant who was left mummified by his worshipers. Having risen again, stronger than ever in modern times, hes one of the most powerful entities in the world if not the cosmos. 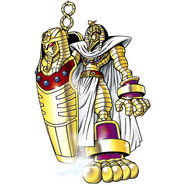 Pharaomon (Digimon) was once the absolute ruler of the primordial Digital world, and had limitless authority over countless Digimon.
Add a photo to this gallery
Retrieved from "https://powerlisting.fandom.com/wiki/Mummy_Lord_Physiology?oldid=1513847"
Community content is available under CC-BY-SA unless otherwise noted.