Younger Toguro (Yu Yu Hakusho) bulking up his muscles to such an extent that even a high-powered Spirit Gun can't pierce him.

Use dense muscles as armor.

The power to use incredibly dense muscle as armor. Sub-power of Supernatural Strength. Combination of Dermal Armor and Muscle Mass Enhancement. Not to be confused with Skin Hardening.

The user's muscles are so dense and bulky, that that they can use it to cause physical attacks to bounce off of their muscles. Since the muscles are directly under one's skin, the bulk can be used to protect one's bones and innards. By bulking the muscles at point of contact, the user can even bounce the attack back.

Gyanza Rujike (Black Cat) using his enhanced muscles to cause bullets to bounce off. 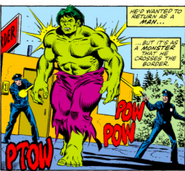 The Hulk's (Marvel Comics) muscles are so bulky and dense that conventional bullets simply bounce off.

Rob Lucci (One Piece) using Tekkai: Utsugi to bulk his muscles at the time of impact, causing the attack to be bounced back.

Hody Jones (One Piece) took so much Energy Steroids that his muscles bulked up to the point of being bulletproof.

Metapod (Pokémon) using Harden to stiffen all the muscles in its body, increasing its defense.

Zangief's (Street Fighter) muscles are so bulky that they can not only stop a katana, but break it to no ill effect...

...and stop a punch from Balrog.

Muscular's (My Hero Academia) muscles harden so much that they were able to stand Deku's Dertroit Smash at 100%.
Community content is available under CC-BY-SA unless otherwise noted.
Advertisement