"Sylvia Lyyneheym... Queenvail's Academy number 1 rank. A Songtress and a Strega, using song as her medium. She can transform her own image in all kinds of ways. Her power is..."Omnipotence."
― Ayato Amagiri (The Asterisk War)

The user can manipulate and generate music, an art form whose medium is sound and silence. Its common elements are pitch (which governs melody and harmony), rhythm (and its associated concepts tempo, meter, and articulation), dynamics, and the sonic qualities of timbre and texture.

Affect those who hear the music:

Miku Izayoi (Date A Live) can manipulate supernatural songs with her Army Breaker Diva.
DVrghASUMAAyaUb.jpg
Barbatos (DC Comics) can release the Anti-Music, a dark chord through his scream which has a variety of effects.

Nonon (Kill La Kill) can use her Musical abilities to attack her opponents.

Through the power of an unnamed Devil Fruit, Scratchmen Apoo (One Piece) can convert his limbs into musical instruments, which he can then play to perform a variety of feats. 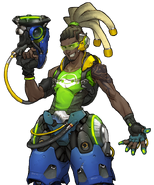 Lúcio (Overwatch) can utilize his songs to give different abilities.

Harmonia (Valkyrie Crusade) the goddess of harmony,music and song.

Musa (Winx Club) is Fairy of Music and can control any kind of music and sound.
Add a photo to this gallery
Retrieved from "https://powerlisting.fandom.com/wiki/Music_Manipulation?oldid=1201640"
Community content is available under CC-BY-SA unless otherwise noted.