The ability to release/use music for various attacks. Sub-power of Music Manipulation. Variation of Art Attacks and Sound Attacks.

The user can release/use music to attacks of various shapes and/or intensities, either projected, used as a part of melee attacks, etc.

Cacofonix (Asterix) singing is so unbearable that he can make human and predator run for their lives, cause fearless people to know the meaning of fear and starts rain/thunderstorms even indoors.

Gian's (Doraemon) singing voice is so horrible, it can be used as a effective weapon as not even supernatural beings like mermaid or monsters in general can handle his horrible voice. He once ruptured the eardrum of 7000 people in the singing contest.

Nymph's (Heaven's Lost Property) singing is so terrible that not only did destroy everyone in the concerts eardrums and destroyed all language barriers but...

...it also managed to damage the moon and dent the Sun.

Brook (One Piece) makes heavy use of his musical skills in combat.

SpongeBob (SpongeBob SquarePants) can conjure blue energy blast to destroy an object by singing and playing the Goofy Goober Rock. 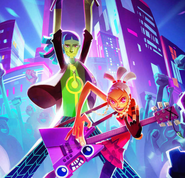 Both May-Day and Zuke of Bunk Bed Junction (No Straight Roads) use their instruments as weapons. 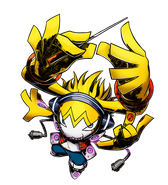 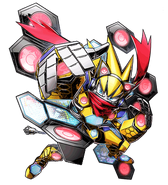 Entermon (Digimon Universe: Apply Monsters)
Add a photo to this gallery
Retrieved from "https://powerlisting.fandom.com/wiki/Musical_Attacks?oldid=1665716"
Community content is available under CC-BY-SA unless otherwise noted.