Possess extensive and skill of music and musical instruments.

The power to possess extensive, if not innate, knowledge and skill in music. Variation of Intuitive Aptitude.

User possesses incredible skill in music/musical instruments. Using this ability, they gain immediate understanding and mastery at using any/all instruments and producing musical notes with it, they can replicate any song heard or described, and have both perfect pitch and the ability to produce any note/tone with any instrument regardless of its nature or difficulty.

As the god of music and the musical arts, Milil (Forgotten Realms) has innate mastery with all forms of music and musical instruments.

Despite never practicing a day in her life, Noodle (Gorillaz) performed an incredible guitar solo that was described as 200 Demons Screaming In Arabic...

...she also skillfully played the melodica while performing the song, Broken.

Benson Dunwoody (Regular Show) can play all form of drums known to men. 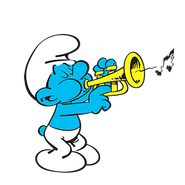 Harmony Smurf (The Smurfs)
Add a photo to this gallery

Broken (Live Visual from Escape to Plastic Beach Tour 2010)
Add a photo to this gallery
Retrieved from "https://powerlisting.fandom.com/wiki/Musical_Intuition?oldid=1398974"
Community content is available under CC-BY-SA unless otherwise noted.