The user possesses bodily fluids (blood, sweat, saliva, etc.) with mutagenic properties causing those to come in contact with it to mutate. His bodily fluids may also allow the user to undergo mutations himself.

Adriana Soria/The Queen (Marvel Comics) possesses a mutagenic enzyme in her saliva, which she spreads to Spider-Man with a kiss... 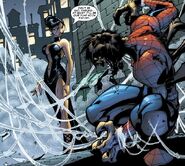 ...causing him to transform into a giant spider.

The Kanabo (Teenage Mutant Ninja Turtles: Fast Forward) spew mutagenic vomit that convert whoever comes in contact with it into more Kanabo.