Have a mutated physique

The power to undergo mutation to have an altered physiology. Sub-power of Science Attuned Physiology. Variation of Monster Physiology.

Freeza (Dragon Ball) is a mutant amongst his species, a trait he inherited from his father, which accounts to their abnormally high power level and cruelty.

Utsuro (Gintama) is a mutated human born under the effects of Earth's Altana, remaining immortal so long as he remains on the planet to draw from the source.

Kouka (Gintama) is a mutated Yato born under the effects of Kouan's Altana, remaining immortal so long as she remains on the planet to draw from the source. 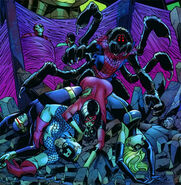 Spider-Man (Marvel) has become the Man-Spider.

Jugo (Naruto) in the process of mutating himself via his enzymes.

William Birkin (Resident Evil 2) was the creator the G-virus. After being mortally wounded, he infected himself with the virus, becoming a mutated creature of incredible strength, but slowly began to lose his humanity afterwards... 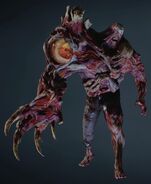 ...as William became increasingly injured during his fights with Leon S. Kennedy and Claire Redfield, the G-virus rapidly healed and evolved his body to that a clawed juggernaut...

...At this point in his forth form, William lost any resemblance to that of a rational being, transforming into a ferocious bipedal monster...

...In his fifth and final form, William has sustained significant damage to the point where the G-virus was unable to fully heal him, leaving him to become nothing more than a mindless mass of flesh and teeth.

Chaos (Sonic the Hedgehog) was once a normal Chao, but was mutated into his current form by prolonged exposure to Chaos Energy.
Tumblr n96cmnqtMq1s42j7go1 1280.jpg
Ninja Turtles (Teenage Mutant Ninja Turtles) were normal turtles before they came into contact with mutagen and mutated into anthropomorphic turtles.
Add a photo to this gallery
Retrieved from "https://powerlisting.fandom.com/wiki/Mutant_Physiology?oldid=865929"
Community content is available under CC-BY-SA unless otherwise noted.