Jared Nomak (Blade II) is a Reaper, a mutated vampire.

Take the form a monster who has been mutated.

Chimera (Marchen Awakens Romance) fused herself with the monstrous body of the Ghost ÄRM, Hydra.

Ian's girlfriend, Gido (Marchen Awakens Romance) was mutated into a bug by Chimera to punish Ian for disobeying orders.

Baron Draxum (Rise of the Teenage Mutant Ninja Turtles) is a mutated yokai. 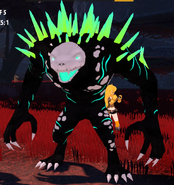 The Mutant Beowolf (RWBY) is one of several species of mutated Grimm created by Dr. Merlot.

Raphael (Teenage Mutant Ninja Turtles 2012) has been turned into a mutant turtle vampire by Count Dracula.

April O'Neil (Teenage Mutant Ninja Turtles 2012) is a human-Kraang hybrid mutant who has been turned into a vampire. 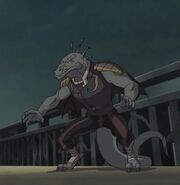 The Lizard King (Ultimate Spider-Man) is an alternate reality version of the Lizard who has become a vampire.

Skals (Vampyr) are vampires mutated by the Spanish flu.
Add a photo to this gallery
Retrieved from "https://powerlisting.fandom.com/wiki/Mutated_Monster_Physiology?oldid=1364664"
Community content is available under CC-BY-SA unless otherwise noted.