Mutant Zombies (Paranoia series) like the Four-Armed Zombies, are possibly, normal Deviants that have been exposed to the R2D Virus for years to come, and turned into Mutant Zombies in the process.

Be a mutated zombie.

The power to be a mutated zombie. Variation to Mutated Undead Physiology. Opposite to Superior Zombie Physiology.

The user is a zombie that has been mutated into a monstrous aberration of what they should be. Mutant zombies are the direct opposite of Metazombies, which happen to have possessed powers through natural genetic or modification even if mutations are relatively minor. Mutated zombies, however, are severely mutated yet have lost their physiology.

Crawler/Gas/Nova Zombies (Call of Duty: Black Ops series) are the result of Zombies being experimented on, but are therefore quoted being failed experiments.

Thrashers (Call of Duty: Black Ops III), are humongous Zombies with massive spores that can ensnare and mutate nearby Zombies.

Necromorphs (Dead Space series) are horrifically mutated corpses or infected individuals by an extraterrestrial pathogen released from the markers, simply known as the corruption. 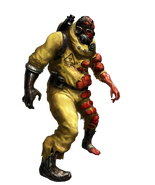 Grenadiers (Dead Island: Riptide) are Zombies with tumorous growths, which they scrape off organic parts of themselves and throw them at their enemies. 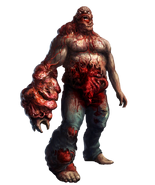 A Wrestler’s (Dead Island: Riptide) abnormally large arm is the result of tumorous growths within the arm, resulting in great strength. 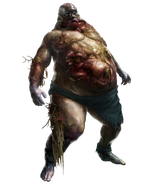 Floaters (Dead Island series) appear morbidly obese as a result of the mutagenic properties of the Pathogen HK virus, and vomit acidic bile at their foes. 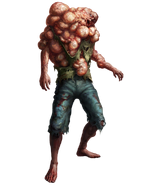 The Suiciders (Dead Island series) are zombies that have been mutated by the mutagenic components of Pathogen HK, resulting in a severely tumorous appearance and the ability to detonate themselves. 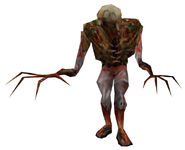 As a secondary stage of the Zombies, Gonomes (Hλlf-Life: Opposing Force) are slightly taller with larger maws.

After Alexander Korolyov (Paranoia) had been bitten by a zombified test subject, he mutated into a Zombie Mutant called the Brain Tree, with the ability to control Zombies and especially Clones.

Depending on the Tyrant Virus strain, the Zombies will either be micromutated into Crimson Heads, or mutating them into Lickers (Resident Evil series).

After taking enough damage, Zombies mutate into Bloodshots (Resident Evil 6) because of the C-Virus’s mutagenic properties awakening in response to the excessive damage being dealt. 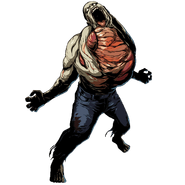 Shriekers (Resident Evil 6) are Zombies that had their lungs heavily mutated, also allowing them to regenerate their lungs, letting out a dangerous scream and on death, causing a sonic shockwave. 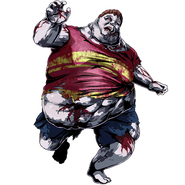 Whoppers (Resident Evil 6) are massive Zombies that have been mutated by the C-Virus’ mutagenic properties, giving them immense durability and strength. 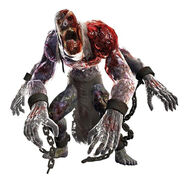 Type-0053/Justice (The House of the Dead Series) is a huge mutated Zombie that has two-extra arms, while the rest of his body is incredibly durable.
Add a photo to this gallery
Retrieved from "https://powerlisting.fandom.com/wiki/Mutated_Zombie_Physiology?oldid=1530139"
Community content is available under CC-BY-SA unless otherwise noted.