Cassandra Jill Warlock (Black Blood Brothers), also called the Black Snake, is a vampire who possesses great magical ability through being the reincarnation of the witch Morgan.

User with this ability either is or can transform into a mystically empowered vampire, with well rounded arcane powers and have tremendous magical power. These abilities may be the result of Mystic vampires being Human Mages before they were turned or they were descendants from a long line of witches and warlocks and have been turned, but other origins are possible, for example being turned/buried on/to mystically significant place.

Mystic vampires can overcome the limitations most vampires have, because of their abilities in magic. 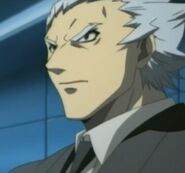 Being a member of the warlock clan Kain (Black Blood Brothers) is a vampire who has great magical ability.

Kumiko Ishihara (Buffy the Vampire Slayer) is a vampire witch who has been trained by Saga Vasuki, granting her magical ability on par with Willow Rosenberg.

Vampire Evileye (Overlord) has impressive magical powers and can blend in with mages.
Add a photo to this gallery
Retrieved from "https://powerlisting.fandom.com/wiki/Mystic_Vampire_Physiology?oldid=1571693"
Community content is available under CC-BY-SA unless otherwise noted.