As a White Mage, Refia (Final Fantasy) can use magic to heal.

Use magic to heal.

The power to use magic to heal. Sub-power of Abjuration. Form of Magic. Variation of Healing.

The user can use magic to heal others or themselves. Its efficiency depends on the amount of magic being used.

Adam (Son of Bigfoot) inherited by his father bigfoot power to heal. 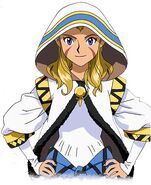 Jessica Alkirk (Lunar: The Silver Star Story) is skilled in the use of healing litanies.

The Cure Angel (Nanatsu no Taizai) is used by Merlin to magically heal her patients' maladies.

Tia and Megumi Ooumi's (Zatch Bell!) fifth spell Saifogeo, creates a floating sword that heals and restores the heart power of whoever it strikes.

Before becoming a Dragon Slayer, Acnologia (Fairy Tail) was able to use Healing Magic to heal other dragons while working as a doctor.

Sherria Blendy (Fairy Tail) is capable of almost immediately restoring any injury inflicted upon her, healing them making it disappear harmlessly...

Talisman of Rebirth (Ninja Gaiden) possess one time powerful healing magic that can instantly restore the user from fatal injuries when on the verge of death.
Add a photo to this gallery

Retrieved from "https://powerlisting.fandom.com/wiki/Mystical_Healing?oldid=1625194"
Community content is available under CC-BY-SA unless otherwise noted.