Mai Kawakami (Musaigen no Phantom World) channeling the water element via her Spirit of the Five Elements ability to infuse it into her fighting style.

"Meditation is spiritual, Martial arts are physical, spiritual gentleness of Yin and physical toughness of Yang, the union of spiritual mind and physical body is what empowers Chi, the breath of life that powers the Iron Fist."
― Danny Rand (Marvel Cinematic Universe)

The ability to utilize supernatural combat in multiple forms of martial arts. Variation of Supernatural Arts.

Some techniques are often either a form of excellence or perfection of an existing martial art and sometimes users of the original tend to change or innovate the martial art to make it their own.

A master and proficient user in the art of Ki, Son Goku (Dragon Ball series) can pull off supernatural feats...

...project and manipulate it in the form of various techniques...

...the Kaio-ken, which can augment his physical strength, speed, and senses up to 20x their natural limit....

The Ripple/Hamon (JoJo's Bizarre Adventure) is the energy used in the way of Sendō, which allows a person to produce energy identical to the energy of the Sun...

...armed with an arsenal of ancient martial art techniques, Jonathan Joestar combined the Ripple/Hamon energy with his powerful physical strength, coating his fists with it...

...inheriting the ability to produce it from his grandfather and mother, Joseph Joestar uses the Ripple/Hamon for a variety of purposes...

...like pressurizing his cola to break a crooked cop's fingers...

After becoming the Ultimate Being, Kars (JoJo's Bizarre Adventure Part II: Battle Tendency) found he could use and produce the Ripple/Hamon.

…allowing them to perform chakra-powered strikes…

Kakuzu (Naruto) harnessed and channels Earth based Chakra into his body to enhanced the strength of his Taijutsu abilities.

Naruto Uzumaki (Naruto) can harnessed both Ninjutsu or Senjutsu chakra to augment his physical combat skills.

A renown swordsman, who wants to be the strongest Roronoa Zoro (One Piece) created the Three Sword Style, wielding one sword in each hand, and on in his mouth…

…which allows him to produce and create powerful techniques…

…and by honing his powerful willpower, he can use a more spiritual sword style, Nine Sword Style…

…and after the 2 years of intense training and constant fights, not only did he further honed his sword skills…

…which lets him enhance and toughen his swords, thus adding more power onto his techniques…

…learned Fox Fire Style, letting him freely generate and cut flames, adding it onto his other sword techniques… 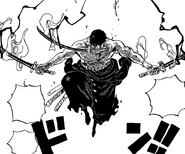 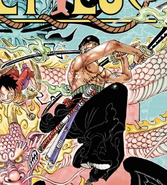 The second-generation master of the Black Leg Style, Sanji (One Piece) evolved his already powerful techniques with his Diable Jambe, a friction infused kicks with the spicy power of a devil.

Jinbe (One Piece), a powerful practitioner of Fishman Karate.

Taught by Hack, Koala (One Piece) is a skilled user of Fishman Karate. 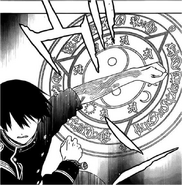 Tsukune Aono (Rosario + Vampire) has been trained in Yōjutsu, the art of manipulating Yōki.

Okhwang (The God of High School) can control the fundamental forces for combat.

Yusuke Urameshi (Yu Yu Hakusho) can infuse his training in Spirit energy manipulation with his street fighting skills to enhance his fighting style.

In the World of Avatar, (Avatar series) chi serves as the metaphysical energy that is the roots the elements of the four Bending Arts, while their martial arts techniques and movements utilizes their abilities...

...Water Bending, a hydrokinetic martial arts that is based on Tai Chi which like water extremely soft, gentle, and flowing, but devastatingly versatile as the spiritual element of Change...

...Fire Bending, a pyrokinetic martial arts based on Northern Shaolin which like fire is aggressive, expanding, and extravagant as the spiritual element of Power...

...Earth Bending, a geokinetic martial arts based on Hung Gar (Except for Toph Beifong's style, which is based on Southern Praying Mantis) which like earth is diverse, strong, and enduring as the spiritual element of Substance...

...and Air Bending, an aerokinetic martial arts based on Ba Gua Zhang which like air is passive, flexible, and dynamic as the spiritual element of Freedom.

Torquasm-Rao (DC Comics) is a Kryptonian meditation that allow users to tap into their instincts and astral project, and Torquasm-Vo is a psychic discipline that involves focusing one's mental discipline to help fight adverse effects such as mental domination and can be used to manipulate someone's mind...

...Superman using Torquasm-Vo to project an illusion, making his opponent see what he wants them to see...

...The Rock of the Buddha, whose skin and strikes are hard as his namesake...

...Fist of Fire, who can enhanced a simple and small burn...

...to an explosive charge with but a few words...

...Storm Sword, a master of the winds and caster of tornadoes... 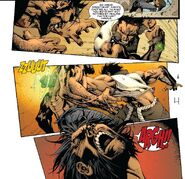 ...who can literally punch souls and make his victim re-live the worst moments of their life.

Even though his physical strength is limited, Yao (Kung Fu Panda: Legends of Awesomeness) is able to use kung fu with his mind, as he had a great mind when he was a child and is the keeper of the Five Mystic Kung Fu Secrets which are a set of difficult kung fu techniques that each have a mystical aspect to them, hence their name.

Ron Stoppable (Kim Possible) possesses the great Mystical Monkey Power, which he can harness to grant himself with a variety of abilities like superhuman speed and strength, an instinctive knowledge of monkey-style kung fu, and greater combat prowess to overpower Lorwardians Warhok and Warmonga.

Yasha (Asura's Wrath) of the Seven Deities is a skilled martial artist who incorporates his Mantra into his attacks.

Terry Bogard (The King of Fighters) is trained in Hakkyokuseiken, a martial arts discipline that allows him to channel chi from the Earth itself. 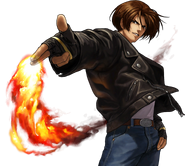 Kyo Kusanagi (The King of Fighters) and his clan are known for their fire-based martial arts.

Segata Sanshiro (Sega) has trained so extensively in martial arts that he can pull of a variety of superhuman/supernatural feats.

Ryu (Street Fighter) has extensive training in the Ansatsuken fighting style, able to perform such feats as Ki manipulation. 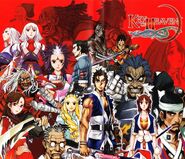 There are various characters (Kingdom of Paradise) who uses a unique swords style, which exist in Ouka's Five Clans ranging from the Zangeki Cut (Seiryu), Shitotsu Thrust (Genbu), the Koda Strike (Byakko), Senbu Dance (Suzaku), Chi Sword Fighting (Kirin). There also exists five different Chi Arts among each clan, but can only be used with a unique sword…

…Shinbu is the fourth practitioner of the San'Yuan, the basis for the Five Clan's sword styles split into Law, Way, Art. The San'Yuan is a style able to earn both the respect and fear of those who've heard of their practitioners as well as being powerful enough to defeat Banko. Shinbu soon learned the purest San'Yuan of Sun, Moon, and Stars.

Danny Rand (Marvel Cinematic Universe) is a martial arts master who incorporates his chi into his fist, augmenting his power to incredible feats. 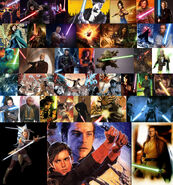 The Ancient One (Marvel Cinematic Universe) is the most skilled master in the Masters of the Mystic Art's unique Magic based Martial Arts, conjuring magical weapons and shields to combat mystical threats.