Zack, Carrie, Andy & Jennifer (Monster Madness: Battle for Suburbia) can manipulate the otherworldy energies of monster tokens in order to transmogrify themselves and strengthen their equipment.

The user can create, shape and manipulate mythic energy, sentient force of the divine, demonic, spiritual, mystical, almighty, kryptic, outer and/or eldritch beings allowing for the transcendence of the natural laws of physics and nature.

Evil Ernie (Chaos! Comics) is an all but unstoppable living corpse who utilizes his Arcane Energies to control the undead and incite megadeath.

Armed with the signet Charles Deckard (Legendary) defeated and absorbed the supernatural animus the beasts of Pandora's Box manifest through. 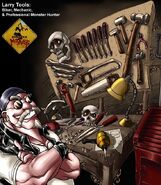 Larry Tools/Laurence Thompson (Monster Madness: Battle for Suberbia) learned to harness power from the Monster Tokens to steal the soul of the demon lord and attain godhood. Finding practice use for it, he often designed weaponry and trinkets powered by their energies.

Argost (The Secret Saturdays) is a cryptid entity who stole Kur powers from Zak's doppelganger from an antimatter universe to gain control of any/all the supernatural entities of the world. 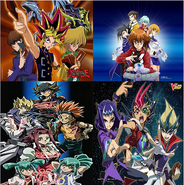 Duelists (Yu-Gi-Oh) harness the power of unique energies given off by the various shadow creatures in the game of duel monsters to gain a of unique powers.

Rowan North (Ghostbusters 2016) was an accomplished mind who could fabricate a great many wonders of engineering via harnessing the ectotheric forces of the afterlife.
Add a photo to this gallery
Retrieved from "https://powerlisting.fandom.com/wiki/Mythic_Energy_Manipulation?oldid=1687655"
Community content is available under CC-BY-SA unless otherwise noted.