Betelgeuse (Beetlejuice) can be summoned and banished by anyone who utters his name three times.

Be called upon by the utterance of their name.

"Only the right name gives beings and things their reality. A wrong name makes everything unreal. That's what lies do."
― Michael Ende

The power to be called upon by the utterance of their name. Variation of Summoning

Users of this ability are able to be summoned by the mere utterance of their name.

Daniel Robitaille/the Candyman (Candyman) can be summoned by anyone who utters his name five times in the mirror.

Rumpelstiltskin (Once Upon a Time) can be summoned by the utterance of his name.

The Spanish Inquisition (Monty Python) appears when they are mentioned.

The Morrigan (The Wicked + The Divine) can be summoned when called for in dark areas. 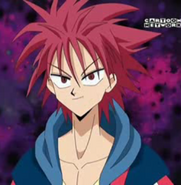 ● (SCP Foundation) will instantly teleport to the location of anyone who describes it, either through vocalization or writing, or utters its SCP number out loud.

Bloody Mary (Western Folklore) is a Revenant that can be summoned through stating her name three times in a row, though this is guaranteed to end in a cruel and brutal massacre.
Add a photo to this gallery

SCP-2521 ●●-●●●●●-●●-● (SCP Animation)
Add a photo to this gallery
Retrieved from "https://powerlisting.fandom.com/wiki/Name_Evocation?oldid=1672666"
Community content is available under CC-BY-SA unless otherwise noted.