Joker 2.0 (The Batman) is a congregated formation of nanomachines each downloaded with the Joker's mind and mental patterns.

Have a body made of nanomachines.

The ability to have a physical body made of nanomachines. Technique of Nanite Manipulation. Not to be confused with Technomorphism.

The user's body is made up of nanomachines allowing the user to manipulate them in any way they see fit. Users can also make nanite constructs and assimilate their surroundings to create more nanomachines.

Joker 2.0 flying through the air by dissipating his lower body

Recent upgrades to his own functioning enables Vision (Marvel Comics) to disperse into and manipulate himself as a microbot swarm. 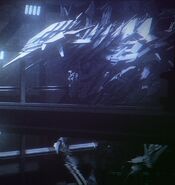 Mechagodzilla (Godzilla: City on the Edge of Battle) is composed of an alien Nanometal that can act autonomously, regenerate, and assimilate other lifeforms and areas around it...

...doing so with the facility where it was created and the surrounding area to create Mechagodzilla City. 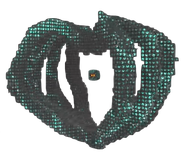 The Darkubes (Kingdom Hearts III) are the remnants of the Microbots created by Hiro Hamado, corrupted into a Heartless.
Add a photo to this gallery
Retrieved from "https://powerlisting.fandom.com/wiki/Nanite_Mimicry?oldid=1331248"
Community content is available under CC-BY-SA unless otherwise noted.