Gaia (Greek Mythology): the great mother of all

"Come forth into the light of things, let nature be your teacher."
― William Wordsworth

The power to speak with nature. Sub-power of Nature Manipulation. Variation of Omnilingualism. Not to be confused with Ecological Empathy.

The user can communicate with nature either telepathically, by speaking verbally, or by touching it physically. This can manifest literally, allowing one with this ability to become instantly familiar with their surroundings, talk to plants and tell them to grow, or discern events based on the movements of plants, animals, rocks and trees.

This may allow the user to manipulate nature to a degree, such as talking to the sky to calm storms or invoking weather phenomena with their emotions (such as lightning if angry).

As the Fairy of Nature Flora (Winx Club), uses her powers to communicate with mother nature.

Lin Li/Nature Girl (Marvel comics) can communicate with both animals and plants. 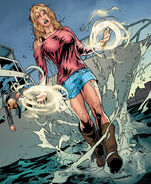 Geomancers, like Kay McHenry (Valiant Entertainment) have the ability to communicate directly with the Voice of Earth.
Add a photo to this gallery
Retrieved from "https://powerlisting.fandom.com/wiki/Nature_Communication?oldid=1766194"
Community content is available under CC-BY-SA unless otherwise noted.