Become the embodiment of nature.

The power to become the embodiment of nature. Variation of Nature Manipulation, Planetary Embodiment and Power Manifestation.

The user acts as the physical manifestation or personification of nature: as such, they have total control over the forces of nature; elements, animals, etc.

Lala-Ru (Now and Then, Here and There) is the embodiment of nature in the form of a young girl, she also carries a pendant around her neck that contains all the water for the entire earth

The Sacred Sprout/Sacred Bud (Winx Club), a magical flower that is the embodiment of all nature, is both the source of magic to Diana, Major Fairy of Nature, and the Source of Nature. 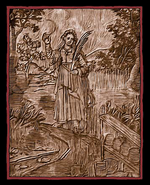 Rhya the Earth Mother (Warhammer Fantasy) is the gentle side of nature..

... while her Husband Taal is harsher indifferent side.
Add a photo to this gallery
Retrieved from "https://powerlisting.fandom.com/wiki/Nature_Embodiment?oldid=1151057"
Community content is available under CC-BY-SA unless otherwise noted.