T'Challa/Black Panther (Marvel Comics) as King of the Dead became a necromancer being able to take command of the dead itself. He was able to take control of an entire army of zombies and order the spirits of the Necropolis.

The power to utilize magic involving the dead, death-force and/or souls. Form of Magic and Dark Arts. Utilized by Necromancers. Magical variation of Death-Force Manipulation. Opposite to Animancy. Not to be confused with Death-Force Arts.

The users either have magical abilities or have powers that revolve around manipulating the dead, death, the death-force and/or souls for good (i.e., resurrecting the dead), evil (in various ways), or neither. They can also communicate with the deceased – either by summoning their spirit as an apparition or raising them bodily – for the purpose of divination, imparting the means to foretell future events or discover hidden knowledge. This is most frequently depicted as being able to resurrect the dead to varying to degrees, from shambling corpses to conscious zombies to even complete Resurrection. More powerful users and directly convert the living into the undead, allowing them to bypass conventional durability by turning an opponent into a mindless zombie at the user's control. 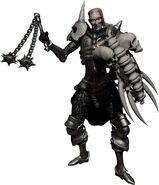 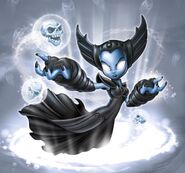 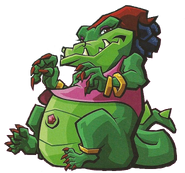 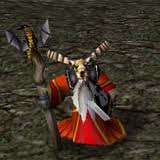 Zog the Eternal (Shadow of War) is an Uruk necromancer that was inspired by Talion's inability to die to create a legion of undead orcs and resurrect the Balrog Tar Goroth to serve Lord Sauron.

Jack Boniface/Shadowman (Valiant Comics) In a possible future, Jack while in his Shadowman guise, was shown commanding reanimated skeletons to do his bidding.

Charmcaster (Ben 10 Series) using a dark resurrection spell to bring her father back from the dead which requires all the living souls in Ledgerdomain.

Mozenrath (Aladdin: The Animated Series) can use his gauntlet to summon an army of Mamluks, undead zombies with one of them being his stepfather/mentor Destante the original ruler of the Land of the Black Sand.

Morgan le Fay (Marvel Comics) was very powerful in necromancy so much so that Doom actually traveled back in time in order to learn from her how to create an army of monsters as well as cast a spell to re-animate every person killed by the sword Excalibur by using a shard of the sword itself in an effort to create an army of the dead.

Raven Hex (Tarot: Witch of the Black Rose) is a witch that follows a dark-path, and in doing so she was known for using forbidden and dark magic including necromancy to use as she sees fit.

Walt Stone (Kane Chronicles) is the permanent host of Anubis and has displayed the ability to summon undead warriors from a crack in the ground. They can drag enemies into the Underworld. He can also summon people or spirits from graveyards, although for a short time.

The Nightsisters (Star Wars) had great authority over the dead. Using Magick they can summon the Ghosts and Zombies of their departed kin.

Councilor Chang (American Dragon: Jake Long) using a powerful Resurrection Spell to bring The Dark Dragon back to life and infuse him with even more dark powers than he had before, making him nearly impossible to defeat than he was last time. 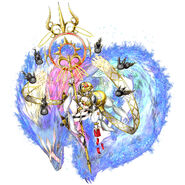 Aside from its powerful Onmyōdō magic, Sakuyamon X (Digimon) is also said to be a skilled necromancer. 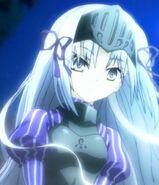 Eri Nakamura (Arifureta Shokugyou de Sekaisaikyou) is a genius necromancer, who can reanimate hundreds of corpses and interface directly with the souls of the dead.

As one of the few wields of death-attribute magic, Vandalieu (The Death Mage Who Doesn't Want a Fourth Time) can take the soul of any being and use it to reanimate the dead or create Golems, Cursed Weapons or Living Armour.

Nicknamed the Boneyard Sorcerer, Johann Faust VIII (Shaman King) is a highly-skilled Shaman specializing in Necromancy, able to reanimate not only his Guardian Ghost but also control an entire army of skeletons.

The Shadow Monarch, Sung Jin-Woo (Solo Leveling) can create Shadow Soldiers and Beast from the dead to serve him.

Edo Tensei (Naruto) is a forbidden Necromancy Jutsu which summons Souls from the afterlife and bound them to a live sacrifice to served as their vessels, depending on the user the souls can retain their own minds or be subjugated by the users's will

Through a pact she made with Set, Ahmanet (Dark Universe) gained tremendous power over necromancy, able to reanimate herself as an undead, mummify people and even reanimate dead corpses that abide by her will.

Book of the Dead (The Mummy) 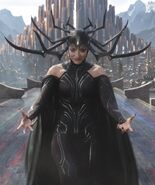 As the "Goddess of Death," Hela (Marvel Cinematic Universe) was being able to resurrect her allies, her pet wolf Fenris and her Berserkers, using a handful of flame from the Eternal Flame and tossing it against the ground to create a huge blast of green infernal energy. 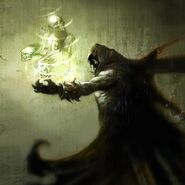 Julius Kane (Kane Chronicles) is the permanent host of Osiris the god of underworld As the Ruler of the Land of the Dead, he has divine authority and complete control over the dead.
Português do Brasil
Community content is available under CC-BY-SA unless otherwise noted.
Advertisement