"Everyone has a little death inside them. "
― Abigail Arcane (DC Comics)

The power to induce necrosis in living organisms. Sub-power of Biological Manipulation.

The user can cause necrosis, or premature cell death, in others, causing the rapid decay of the victim's flesh.

Sesshōmaru (InuYasha) wielding the Bakusaiga, which rots flesh with its aura.

...rotting the part that she touched away.

Hakuyuu Ren (Magi the Labyrinth of Magic) can use Belial's Metal Vessel to completely sever the spiritual connection of the physical body to the soul...

...causing necrotic damage that is impossible to heal. 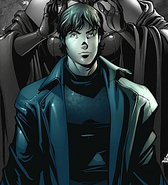 Hiruzen Sarutobi (Naruto) tried to seal Orochimaru's soul, but only succeeded in severing that of his arms, causing necrosis in them
Add a photo to this gallery
Retrieved from "https://powerlisting.fandom.com/wiki/Necrosis_Inducement?oldid=1387503"
Community content is available under CC-BY-SA unless otherwise noted.