Chelsea (Akame Ga Kill!) stabs Kurome with a needle with lethal precision at her vital spot in the neck.

The ability to use needles with great skill. Variation of Improbable Weapon Proficiency.

Users are capable to use needles with great aptitude and skills. While needles are too small to inflict any large-scaled damage by conventional means, their size makes them very useful for delicate maneuvers. A skilled user can throw them with great accuracy and precision. Their small sizes make them perfect for concealment and stealth attacks, and can even be hidden inside one's mouth, which can be spat out to take the enemy by even more surprise.

Though rare, needles can be used as melee weapons such as a small knife, inflicting small slashes via the pointed tip. A person who can throw needles with enough force may be able to pierce through armor and defenses. Needles can also be (and is considered a common practice) dipped in poison to increase their lethalness.

With the proper knowledge of the human physiology, one can aim the needles for vital pressure points, resulting in incapacitation or even instant kill if it strikes. Using the same knowledge, the user can apply acupuncture with needles to boost the body or staunch pain and bleeding.

Danjō Kōga (Basilisk) specializes in needles, shooting them with great accuracy and force, piercing through armor and vital points. 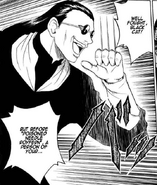 Royfern (Black Cat) is confident of his skills as the "Poisoned Needle", incorrectly believing himself good enough to fight even the Black Cat.

Senjumaru Shutara (Bleach) is extremely deadly in using her sowing needles in combat.

Oboro (Gintama) utilizes poisoned needles to maximum effects of disabling his opponents while enhancing his own strength.

Haku (Naruto) using needles for combat, whether for throwing accurately, slashing, or even forming them from Thousand Flying Water Needles of Death.

Kushimaru Kuriarare (Naruto) wielding the Nuibari, which is basically a giant needle sword with wires for sewing victims together, very effectively. 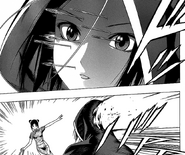 Sheik (The Legend of Zelda) using Needle Storm to gather a bundle of needles, and then throw them with great accuracy to cause accumulated damage.

Antares (Valkyrie Crusade) is an expert assassin who finishes her opponents with a brutal poison needle.

illumi can throw needles with ease and can control living or dead with those needles
Add a photo to this gallery
Retrieved from "https://powerlisting.fandom.com/wiki/Needle_Proficiency?oldid=1620087"
Community content is available under CC-BY-SA unless otherwise noted.