Alakazam (Pokémon) can use Gravity to negate Flying types' negation of Ground-type attacks.

The power to counter negation-based abilities. Variation of Negation.

The user can counter all forms of negation, allowing any power that would otherwise be negated by a negation based power to work in the presence of a user of negation, restoring powers that were negated in the first place. 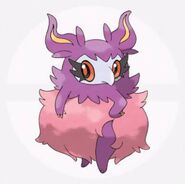 Pokémon that know Odor Sleuth, such as Aromatisse (Pokémon) can negate the ability of Ghost types to negate Normal type attacks.

...allowing it to hit a Gastly with a Tackle attack.
Add a photo to this gallery
Retrieved from "https://powerlisting.fandom.com/wiki/Negation_Countering?oldid=1505510"
Community content is available under CC-BY-SA unless otherwise noted.