Nekra (Marvel Comics) possesses the mutant ability to increase her physical abilities and resistance to pain by harnessing negative emotions within her.

User becomes stronger, faster, more durable, etc. by a quintessential negative emotions, such as anger, hatred, sadness, envy, depression, arguments, fear, etc. of oneself and others, possibly unlocking abilities related to the affinity and enhancing their existing powers. Some users may be able to draw sustenance from the negative emotions or even slow or stop aging. 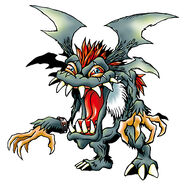 Vilemon (Digimon) feeds on peoples anger and greed until they're completely under its control.

Those who use Curses (Fairy Tail) are powered by negative emotions.

Vigo the Carpathian (Ghostbusters II) was able to amass great supernatural power through the mood slime beneath New York, negatively charged by the misery and bitterness of the average New Yorker.

Orb (Marchen Awakens Romance) is a being born from the darkness of humanity. As such, he grows stronger by feeding on negative emotions.

The King (Sekai Oni) is an empty vessel, an artificially created human, filled with the combined darkness of the negative emotion of all of the 100 million people living in the Tower of Maze, which grants him incredible power.

Sonic the Hedgehog (Sonic X), in his Dark Sonic transformation.

Fallen Samurai (Valkyrie Crusade) is a ghost that is empowered by vengeance.

The Knights of Destruction (W.I.T.C.H.) are able to draw strength from their targets anger, hatred, despair, emotional pain and despair.
Add a photo to this gallery
Retrieved from "https://powerlisting.fandom.com/wiki/Negative_Emotion_Empowerment?oldid=1350892"
Community content is available under CC-BY-SA unless otherwise noted.