Use the traits of mythical Nephalem

The power to use the abilities of a Nephalem. Variation of Hybrid Physiology. Combination of Angel Physiology and Demon Physiology. Not to be confused with Nephilim Physiology.

User with this ability either is or can transform into a Nephalem. These creatures have appeared in various forms of media, and have been described as the offspring of both an Angel and a Demon, but they can also be an Angel/Demon that possesses demonic/angelic powers. However, users of this power will have the potential to become more powerful than either side.

This is due to the fact that said spirit would be neutral and possess power from the forces of both Light and Darkness. These beings are based on the Nephilim, the hybrid offspring of an Angel and a human, with the only difference being that both parents are immortal spirits. (Note: However, if the user who actually obtains this power is human, or alternatively a Nephalem mates with a Human, they will become/technically have a born child that would be just like the "Nephilim". In fact they would be an Angel/Demon/Human Hybrid.)

In terms of Moral alignment, Nephalems are mainly neutral, some others may also be considered wild cards, going to the side of good, evil or anywhere in between. The same can also be said for the personality of said being. As for appearances, the wielders form can have unique features from both sides of their heritage such as small horns and/or a halo, some having eyeballs that are from an Angel and a Demon, sometimes having both a demonic and angelic wing on either side of their backs, or colored skin and a supernatural, glowing aura that displays their divine status.

At least in terms of deviating depictions, Nephalems could be the embodiment of chaos, where they basically tend to value freedom over order. In another perspective, since they are hybrids of Demons and Angels, they can embody both order and chaos, which is when they tend to balance both chaos and order to make the rest of existence more compromising and pleasant, as well as for the sake of creating true harmony. This sort of depiction of them are also responsible for keeping both afterlife planes in a state of balance, namely both Hell and Heaven. 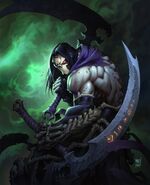 Bastia (Valkyrie Crusade) is an angel that failed to fully transform into a demon, rendering her as a mixture between angel and demon.

Akeno Himejima (High School DxD) is Half-Fallen Angel, but was later resurrected as a devil.
Add a photo to this gallery
Retrieved from "https://powerlisting.fandom.com/wiki/Nephalem_Physiology?oldid=1408269"
Community content is available under CC-BY-SA unless otherwise noted.