Use the traits of nephilims.

"When people began to multiply on the face of the ground, and daughters were born to them, the sons of God saw that they were fair; and they took wives for themselves of all that they chose. Then the Lord said, "My spirit shall not abide in mortals forever, for they are flesh; their days shall be one hundred twenty years." The Nephilim were on the earth in those days—and also afterward—when the sons of God went in to the daughters of humans, who bore children to them. These were the heroes that were of old, warriors of renown."
― Genesis 6:1–4, New Revised Standard Version

The power to use the powers of nephilims. Variation of Mythic Physiology and Hybrid Physiology. Angelic counterpart of Cambion Physiology. Not to be confused with Nephalem Physiology.

User with this ability either is or can transform into a Nephilim: a being (most commonly one of the first generation) with both mortal and Angelic Ancestry.

Note: In mythology, the Nephilim is considered to be the result of a union between an Angel and a mortal woman. This is similar to the conception of the Demigods in mythology. Just like said demigods, Nephilim can come in forms other than the traditional kind. Said forms would involve being a human who went through a form of ascension, where they became an angelic being themselves. Another form would be a mortal with an Angelic Soul.

As partially mortal, they are more bound to their form than their non-mortal parent, but their personalities and minds are far less defined by their spiritual aspect. In some forms of media, Nephilim are shown to be equal or higher in power than full members of the supernatural race they descended from. This is generally explained with the claim that the human soul enhances the spiritual/divine power gained from their "parent".

Combination of mortal and physical with immortal and immaterial is highly unpredictable, and someone with heritage from both sides can lean on either side of their ancestry. Thus, nephilim can be divided into three broad groups:

Near-Mortal Nephilim favor their mortal parents or are more distant descendants. They are mostly similar to their mortal kind in both mind and body, but with some additional abilities and instincts. Outwardly, there are few or no indication that the individual is anything but normal.

Balanced Nephilim are balanced between their heritages, if sometimes rather precariously, and have both free will and good amount of power. There are likely number of definite traits and instincts that draw them toward their inhuman side. Physically, they tend to have at least few indications about their non-mortal parentage, but the amount varies greatly between individuals.

Following powers are among the most common ones nephilim may have:

Emi Yusa (The Devil is a Part-Timer!) 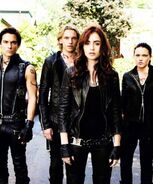 Briadach (DC/Vertigo Comics), son of Lilith and the angel Ibriel.

Basara Toujou (Testament of Sister New Devil) after removing his limiters and entering his Nephilim form.

Jack (Supernatural) is the son and the first known nephilim born between the archangel Lucifer to a human woman Kelly Kline.

Waverly Earp (Wynonna Earp)
Add a photo to this gallery
Retrieved from "https://powerlisting.fandom.com/wiki/Nephilim_Physiology?oldid=1719046"
Community content is available under CC-BY-SA unless otherwise noted.